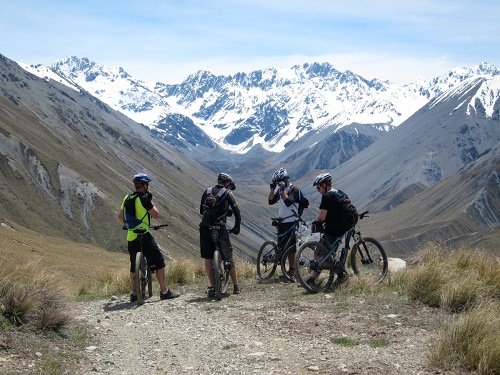 Last year, I had an epic boys weekend in the Hakatere Conservation Park – a 60,000 hectare wilderness of rugged mountains, beech forest and crystal-clear rivers and lakes, situated in the backcountry behind Methven. Here’s what went down…

The boys
When it comes to MTB adventures, age is irrelevant. Fitness though is a whole different ballgame. As a guide, I often see people miss out on the full enjoyment of a ride because they’re hurting too much. The boys are in good spirits when I pick them up at the airport. A major deal has been struck and two days of hard physical grunt on the bike are eagerly anticipated. Quite what state these city slickers will be in by Sunday remains to be seen!

The accommodation
The boys have been clear: an honest day in the saddle deserves decent accommodation. How does a modern cottage, situated right next to Lake Heron featuring killer views, new kitchen, spa pool and 42” TV complete with Sky sound? The townie’s prayers are answered, the ABs win by 10 and I too seem to have risen in the popularity ratings.

The ride
After spending many hours debating which rides will best showcase the beauty of South Island mountain biking, it’s Sandra who eventually puts together our two-day itinerary, complete with maps, helpful hints on what to see and a backup plan if the wind and rain rolls in. Although that’s one aspect of the weekend I already have sorted: cards and whiskey.

Fortunately we wake to perfect weather, so the whiskey is stashed for later and we set out early. Sandra’s 17.5km route takes us from Lake Heron up through the Arrowsmith Range, a circuit she estimates will take us around four hours and should be suitable for intermediate riders.

Very quickly it becomes clear that this isn’t going to be a walk in the park for everyone, with the legs well and truly tested on a long, slow climb that progressively gets steeper…and steeper. With a final push – and yes, for some that involves actual pushing – we make the Pass. The views are breathtaking and well worth the effort.

After catching our breath, we drop down to Balmacaan Stream, along a steep and narrow track. It’s at this point we decide to take another look at the map and realise Sandra’s fitness levels are far better than our collective efforts. It’s going to be a few more hours in the saddle yet.

We pick up the pace and head up the last pass to be greeted by spectacular views of the upper Rangitata River. But the real reward is the final 10km of downhill back to our luxury pad, where cold beers on the veranda await.

Some of us manage to venture out the next day for Sandra’s second route: a ride around Lake Emma, which is a great blast. But that’s a story for another day.

The essentials
Hakatere Conservation Park is approximately 144 km south of Christchurch. Access is via Inland Scenic Route 72 or State Highway 77.

Parts of the Arrowsmith Range are on private land, so make sure you get permission from the manager or owner before setting out. For the Arrowsmith Station, phone Aimee on 03 303 9090.

Stick to marked tracks and leave gates as you found them.

The weather in the backcountry can change rapidly, so ensure you carry appropriate clothing, as well as food, water, tools and a first aid kit.

This story appears in the current edition of Licence to Ride NZ, which is available from all good cycle retailers…including us!