Spend a Night in a Castle Dripping with Drama 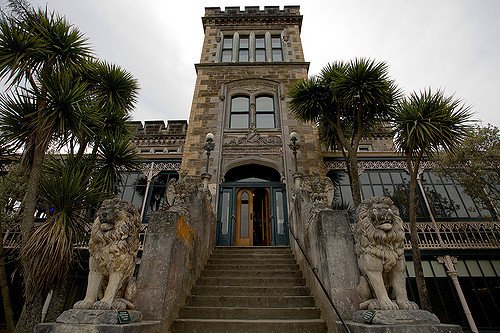 Perched on the picturesque Otago Peninsula, Larnach Castle is the final overnight stop on our 7-Day Queenstown to Dunedin road tour.

Built between 1871 and 1887 by the Australian banker and politician William Larnach, this sprawling property (and the only castle in New Zealand), has an alluring, yet tragic history. After taking possession of his new home, Larnach’s daughter, first wife and second wife died from assorted illnesses. Later, his bank went bust and in 1894, after receiving news of his third wife’s affair with his son Douglas, Larnach shot himself in his parliament chamber.

With such a catalogue of family misfortune, it’s hardly surprising that numerous spooky sightings have been reported at the castle over the years, with visitors claiming to have seen – and heard – all manner of ghostly apparitions.

Whatever your take on the supernatural, there’s plenty of other reasons to enjoy a visit to Larnach. The property, which has been carefully restored by its current owners, is a blend of Scottish-baronial and Gothic revival-style architecture, combining Italian marble, Venetian glass, Welsh slate, English tiles and native New Zealand rimu and kauri.

Outside, the grounds feature rock and heather gardens, a native plant trail and a wishing well, as well as sweeping views across the Otago Peninsula. It’s a fitting finale to a tour that’s already given you a deep insight into rural South Island life; from the misty magic of Milford Sound to the wild coastline of the Catlins.

Our 7-Day Road Cycle Tour Queenstown to Dunedin is a fully-supported tour and suitable for riders with little to no previous touring experience. Accommodation and most meals are included, and you’ll be accompanied at all times by an experienced guide and support vehicle. You won’t even have to ride with luggage, since we’ll take care of transferring it to your next overnight stop.

Two departure dates for 2017 are available: 21 January-27 January and 14 March-20 March. For bookings or enquiries, get in touch. And don’t worry about the Larnach ghosts – you’ll actually be staying in Larnach Castle Lodge, a new residence which sits alongside the original castle.

P.S. More of a independent tourer? You could visit Larnach Castle as part of our 6-Day Self Guided Catlins Coast tour.