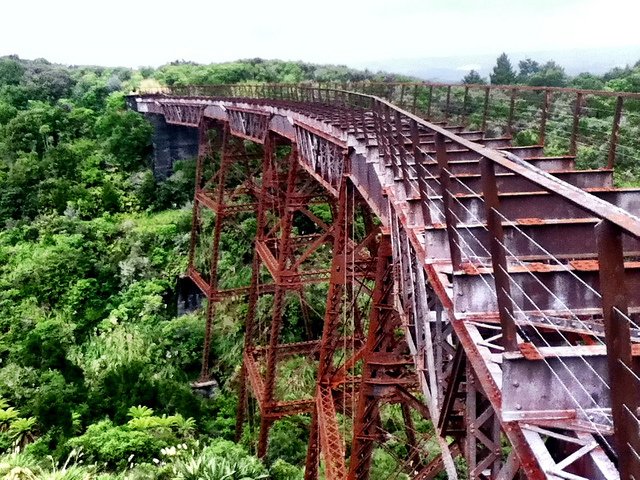 Constructed in 1907, this cobbled road was originally used to ferry goods and passengers between the northern and southern railheads. The route was abandoned upon the completion of the North Island Main Trunk line in November 1908, and lay forgotten until 2002.

Today, the 15km road serves as a popular cycle and walking track. If you’re only planning to ride one-way, the route from Horopito to Ohakune is easier, with a mainly downhill gradient all the way. If you’re cycling both legs, start out at Ohakune and get the uphill slog out the way first (although there are only one or two steep sections and most of the track is easygoing).

Various impressive sights line the route including the only two curved viaducts remaining in the Southern Hemisphere. Taonui Viaduct and the much-larger Old Hapuawhenua Viaduct were constructed in 1907–8 under tough, working conditions. Thanks to recent restoration work, Old Hapuawhenua Viaduct (where AJ Hackett established bungy jumping) is crossable.

The road also dives through the pitch black of the curved Hapuawhenua train tunnel, and meanders alongside ancient forest where you can catch glimpses of giant rimu and spiky mountain cabbage trees.

Vintage car fans should also request a diversion to Horopito Motor Wreckers, commonly known as Smash Palace due to its role in a cult 1981 movie of the same name.

Experience this ride with a combined campervan and bike rental. This is a great way to see New Zealand and sample a selection of cycle trails along the way. Head here to see the full range of vans available.