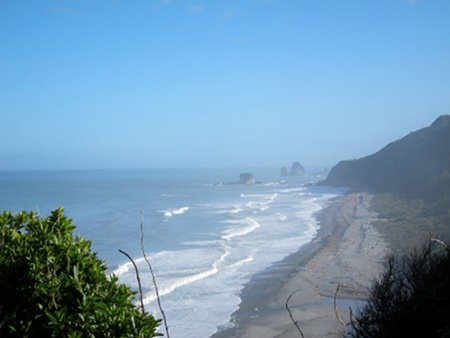 Wondering which of New Zealand’s many scenic roads to bike or drive? Here are our three top picks.

The Lost World Highway
New Zealand’s oldest touring route stretches for 155km from the North Island’s Central Plateau to Taranaki on the west coast. Built on colonial bridle paths formed in the late 19th century, the road features four mountain saddles, one spooky tunnel, and one snaking river gorge. Stop to pick up a passport in Whangamomona – this small village declared itself a republic in 1989.

West Coast of the South Island
Named one of the top ten coastal drives in the world by Lonely Planet, this is a wild, rugged, and totally unforgettable landscape. The route wriggles its way along the surf-pounded coast, throwing up endless snapshots of lush, green rainforest, glacial rivers and intriguing geological features. With numerous walks, towns, beaches and history to explore along the way, this is a route well worth taking slowly.

Queenstown to Glenorchy
With Lake Wakatipu on one side, the Remarkables to your rear, and Paradise ahead (literally – there is a town called Paradise), this short, 45 minute drive packs a mighty scenic punch. You might recognise the surroundings: scenes from all three of the Lord of the Rings movies were shot in the area, as was the 2013 TV series Top of the Lake.

Fancy putting one (or all) of these routes on your New Zealand itinerary? We can help you arrange bike hire, campervan hire, or combined camper and bike hire. Many of our guided cycle tours also travel along the west coast of the South Island. Get in touch if you have any questions.

P.S. If you’re contemplating a campervan tour this summer, please note that vans sell out quickly over the warmer months. We recommend booking early to avoid disappointment! Check out your options on the website, and then get in touch today.