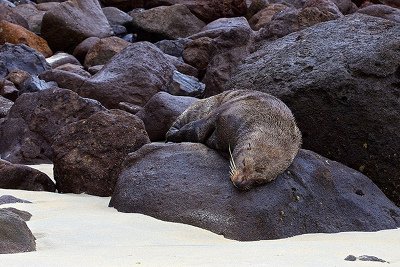 Wherever you go in New Zealand, there’s a good chance you’ll bump into some fairly colourful characters (Andy included). Here’s a short introduction to some of our country’s wildest encounters….

New Zealand fur seals
Where: Palliser Bay, Wairarapa
From May to September this stretch of coastline is a popular hangout for New Zealand fur seals, who like to sunbathe on the rocks and show off in the surf. Also keep your eyes peeled for New Zealand falcon – they regularly breed in and amongst the impressive rock formations known as the Putangirua Pinnacles.
Further along the bay you’ll find the fishing village of Ngawi, famous for its collection of vintage bulldozers used to tow the fishing boats into the sea. (See if you can spot the pink one called Babe!)
Nearby cycle trails or tours: Rimutaka Rail Trail. 5 Day Guided Cycle Tour Wellington to Greytown

Underwater life
Where: Goat Island, just north of Leigh and about 90km north of Auckland.
Prepare to be amazed at just how much goes on below the surface. New Zealand’s first marine reserve has more fish than any other beach around mainland New Zealand. Strap on a snorkel and swim amongst shiny snapper, schools of kahawai, red moki and spiny crayfish – it really is another world down there. Some of the snapper are over 30 years old and even have names…like Panda, distinguished by his dark eye and snout.
Best viewing spots: in the water with snorkel gear – you can hire equipment at the reserve. Alternatively, take a tour in a glass-bottom boat. Ideally you’ll want to visit on a clear, calm day for maximum visibility. Check Seafriends for an up-to-date forecast.

Whales, dolphins, fur seals and albatrosses
Where: Kaikoura
The nutrient-rich waters of the Kaikoura Peninsula attract an abundance of marine life: dusky dolphins, bottlenose dolphins, Hector’s dolphin, orca, fur seals and the giant of the deep – the sperm whale. During spring and late summer you might catch a glimpse of a passing humpback whale. Bird life is busy too, with 12 species of albatross – including the impressively-sized wandering albatross – sighted regularly.
Best viewing spots: the peninsula walkway. Watch out for fur seals lounging in the shrubs during the summer months. They’re not fond of being disturbed. Alternatively take one of the many boat tours on offer.
Nearby cycle trails or tours: 4 Day Guided Road Tour Canterbury

Birds, birds and more birds
Where: Te Waihora/Lake Ellesmere, Banks Peninsula
Te Waihora has one of the most diverse bird populations in all of New Zealand, with over 98 000 birds living here at any one time. Watch out for caspian tern, white egrets, shags, bitterns and bartailed godwits, who travel here every September, making a marathon, non-stop flight from Alaska to escape the winter snows.
Best viewing spots: anywhere along the shoreline. Bring binoculars for optimum viewing.
Nearby cycle trails: The Little River Railtrail runs right along the lake shore.

Penguins
Where: Oamaru
Who can resist a penguin? Oamaru in the South Island is home to yellow-eyed penguins (unique to New Zealand) and the tiny blue penguin. Penguins spend their days at sea, so dusk is prime viewing time.
Best viewing spots: Bushy Beach Scenic Reserve. There’s a free hide where you can watch the yellow-eyed penguins returning to their nests after a day fishing.
Oamaru Blue Penguin Colony. Attend an evening viewing to watch the birds swim ashore.
Nearby cycle trails or tours: Alps 2 Ocean.

Kiwi birds
Where: Stewart Island
Quiet, remote Stewart Island is one of the best places in New Zealand to experience kiwis in their natural habitat. You can join a kiwi spotting tour to maximise your chances of spying this shy bird.
Nearby cycle trails or tours: 8 Day Guided Cycle Tour from Queenstown to Dunedin
Other kiwi spotting locations: Kapiti Island, a nature reserve 70km north of the capital has overnight tours available. Or, view kiwi birds at Otorohanga Kiwi House, on the North Island.