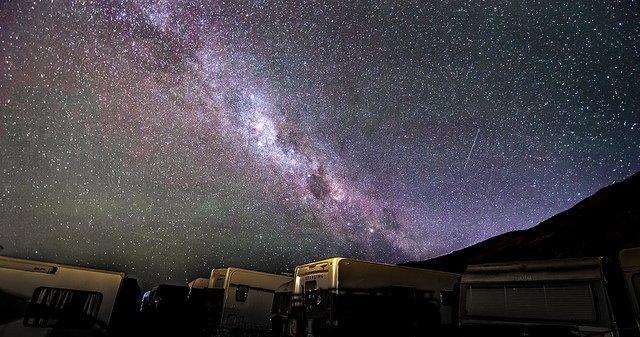 One thing you must do when in New Zealand is venture outside after dark – our night skies are likely to be clearer and brighter than any you’ve ever seen before.

Little to no light pollution and crystal-clear air means a stunner of a night show just about anywhere in the country.

Not only are our night skies brighter, they’re also different. You’ll get to see features not usually seen in the northern hemisphere, like the Southern Cross and the Southern Celestial Pole, and if you’re lucky you might even catch a glimpse of the Aurora Australis or Southern Lights.

Pretty much everywhere outside the main cities offers a spectacular night sky, but for truly first-rate viewing head to the Aoraki / Mount Cook Mackenzie region.

The Mackenzie Basin is the southern hemisphere’s first dark sky reserve, in recognition of its almost light-pollution-free skies. The reserve includes Aoraki Mt Cook National Park and the villages of Lake Tekapo, Twizel and Mt Cook.

Tekapo has just been ranked the second best spot in the world for stargazing (behind San Pedro de Atacama in Chile) by reservation website Booking.com. The village has two observatories – Mount John University Observatory and Cowan’s Observatory – which run popular twilight tours.

If you’re travelling around New Zealand at the start of winter, you might notice talk of Matariki.

Matariki is the Māori name for the small cluster of stars in the Taurus constellation that rise during the New Zealand winter. Matariki is an important time in the Māori calendar – it signals the start of the Māori New Year and was once an important indicator of forthcoming weather.

Matariki celebrations take place around the country. In Wellington, Te Papa have events running from 13 June to 12 July.