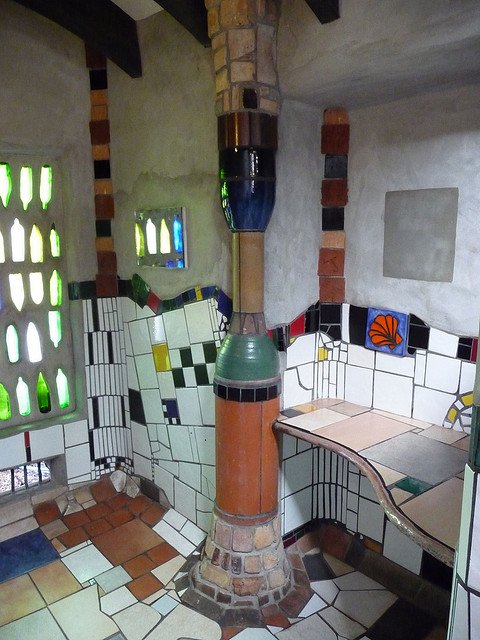 I love oddball tourist attractions. Luckily New Zealand’s got a fair few weird and wacky things to see. If you find yourself cycling past any of the following spots, pull over and take a look.

Crazy toilets: Hundertwasser Toilets, Kawakawa, Northland
Probably the only public toilet block in the world where you’ll want to linger. The psychedelic style was the work of artist Friedensreich Hundertwasser. There’s even a tree incorporated into the building!
Nearby cycling: Twin Coast Cycle Trail. Follow ancient Māori trails from the east to west coast. Great views over Hokianga Harbour and the Bay of Islands.

Weird waters: Devil’s Bath, Waiotapu, Rotorua
The Wai-O-Tapu Thermal Wonderland is home to lots of weird geothermal delights, but the electric green waters of the Devil’s Bath are the most eye-catching of all. The lake gets its lurid green colour from deposits of sulphur that rise to the surface and float on top. No one’s quite sure where the name comes from, though!
Nearby cycling: Te Ara Ahi Trail. A two-day adventure alongside steaming vents, bubbling mud pools and impressive geysers.

Definitely not an ode to the possum: Opossum World, Napier
Most animal and wildlife museums focus on the beauty and preservation of a species. Not so Opossum World, which educates visitors about the threat the possum poses to the natural environment. Possums are a problem because they eat native plants and species and they’re also carriers of bovine tuberculosis, a major threat to the dairy, beef, and deer farming industries.
Nearby cycling: the Hawke’s Bay Trails. A mostly flat network that stretches over the Heretaunga Plains and offers three different cycling experiences: the Landscape Ride, the Water Ride and the Wineries Ride.

The world’s steepest street: Baldwin Street, Dunedin
The city of Dunedin was planned by urban designers in London. Consequently, the topography of the landscape played little part in the proceedings – resulting in some very steep streets. Baldwin Street drew the shortest straw of this approach, earning it the Guinness World Record for steepest street in the world.
Nearby cycling: Self-guided Catlins tour, running from Dunedin to Invercargill (or vice versa).

Lots of bras: Cardrona Bra Fence, Cardrona, Otago
The Cardrona Bra Fence came to life some time around Christmas 1999, when four bras mysteriously appeared on a farm fence. Within a few months the number had swelled to around 60 and today there are thousands flapping in the wind against a backdrop of rolling hills and grazing sheep.
Nearby cycling: Queenstown to Wanaka road ride over the Crown Ranges.