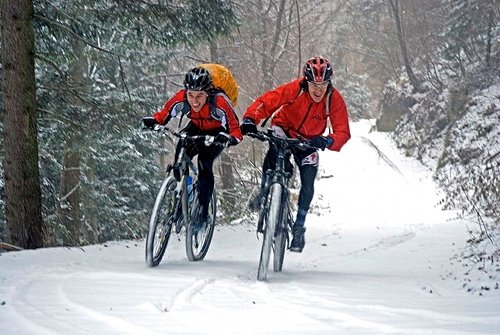 Rose and Roy are long-standing Natural High clients who love cycling in New Zealand (they’ve just completed the Alps to Ocean trail). Unlike most cyclists, they’re big fans of cycle touring in winter. Here’s their story:

“So often we think that summer is the best time to ride New Zealand. There is an alternative. We live in Bundaberg Queensland – home of sugar, ginger beer and rum, in whatever order you like. We understand sunshine.

However, we choose to ride in winter and our longest and most epic trip was from Bluff to Cape Reinga starting on 25 July 2005 so we would finish before Roy’s 75th birthday on 4 September.

Cycling straight up the east coast of the South Island we often found alternative quieter roads to have a break from State Hwy 1. Aussie friends flew over to Christchurch heeding the Marlborough Sav Blanc call where we rested for two days travelling the vineyards.

They flew back and we crossed Cook Strait and travelled up the North Island to the west of Lake Taupo. The weather gods always smiled upon us.

At Hunterville, we had the biggest, strongest southerly tailwind that you could imagine. Up and over National Park to Taumarunui and on to Te Kuiti in two days and it was easy.

We continued on up the west coast to Waiau Pa for a three-day rest with my brother, Pat and his wife Sue. Ferry to Devonport and thence onwards and upwards to Cape Reinga, straight through Dargaville, Waipoua Forest, Kaitia and finally to the top.

We had made it. We had “knocked the bastard off”.

It took five and a half weeks and in that whole time we only had three days with any rain. I told you we were “in” with the weather gods.

You get warm when you cycle and thanks to Ground Effect clothes we were never cold. Riding in the winter means much less saddlesore, less chafing, no worries about how much water to carry and less sunburn risk.

Since then we have come over in the winter many times to ride. Always good weather and lots of fun.”

Tempted to give winter cycle touring in New Zealand a go? Our guided tours only run through the summer months, but self-guided touring is still an option. Head here for a full list of self-guided cycling adventures:
https://www.naturalhigh.co.nz/self-guided-cycle-tours/

Have a great week,
Steve Inns