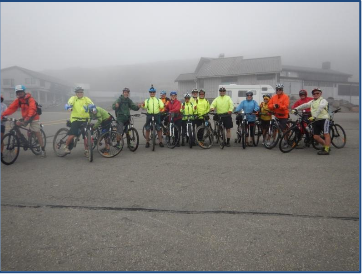 Back in February of this year, the South Australian Recreational Cycling Club (SARCC) landed on our shores for a two-week cycle tour around the North Island.

Taking in the delights of the Coromandel and the Hauraki Rail Trail, Te Ara Ahi (the Path of Fire) in Rotorua, the Bridge to Nowhere Track, the Old Coach Road, various rides around Taupo, the Te Awa Trail and a section of the Waikato River Trails, this was a busy, action-packed adventure.

President and NZ tour coordinator Eric Chaney says the whole 14 days were full of highlights but if he had to pick three rides, “I guess the Hauraki Rail Trail for a great scenic recreational ride, the Turoa Ski Field 1000m downhill in 16km to Ohakune for the adrenaline rush, and the Bridge to Nowhere for the incredible rewarding challenge and jetboat exit.”

Here are excerpts from the group’s trip notes for these rides:

Hauraki Rail Trail
For recreation this is one of the best. We dropped five riders at Kopu; their task was to ride to Waihi to bring three minibuses back. The remaining riders drove to Waihi and rode through the bush clad Karangahake Gorge Gorge to lunch at Paeroa, then on through quiet countryside to Kopu. The trail is a little undulating for the first 5km then settles to flat for the remaining journey. This is a not to be missed recreational ride.

Bridge to Nowhere
We changed dates to avoid any inclement weather and you wouldn’t ride this track in any rain. The Bridge to Nowhere Track is an incredible ride that includes a huge range of track styles, stunning scenery and New Zealand bush. It’s one of the best ‘adventure rides’ on the North Island and a must for all mountain biking enthusiasts.

From the signposted start of the Mangapurua Track, we had a well-graded but challenging climb. Over the course of about 4kms, you’ll climb just about 300 metres on a 4-wheel drive farm track – we found our granny gear and stopped every now and then to look back at the mountain views behind. From the Mangapurua Trig the track literally flies down into the valley for about 7kms, before it flattens out and meanders down Mangapurua Stream along the valley floor for a further 20kms, crossing countless swing bridges. Finally travelling along the valley floor the Bridge to Nowhere quite literally appears from nowhere.

You can expect to complete the Mangapurua Track to the Bridge in four to six hours – including many stops along the way. The track is nearly 100% rideable apart from the dozen or so swing bridges; it is still a bit technical in some downhill parts and some of the exposed sections where the track crosses bluffs. You can expect to hop off your bike a couple times to cross these bluffs. A short 3km track takes you from the Bridge down to the Mangapurua Landing on the edges of the Whanganui River. Ken of Whanganui Jet Boats picked us up from Mangapurua Landing and took us on a fantastic adventure 30km down river to Pipiriki where we organized our minibus to take us 28km home to Raetihi. What an adventure WOW!”

Turoa Ski Field 1000m downhill
We drove 30km up to Turoa at 1625m. We all disembarked in a cold thick cloud and rode down 1000m on a sealed road 16km to Ohakune. The cloud parted at 100m down and the speeds became faster – WOW – the thrill and the concentration was intoxicating. To cap it off we rode through the finish line at Ohakune to cheers and cameras… we had interrupted a MTB race round the base of the mountain and crossed the line in first place – oh well. Great coffee break at OCR CaféOhakune.

Then off to ride the Old Coach Road Ohakune to Horopito (I recommend riding Horopito to Ohakune next time). The views of the old viaduct and the bush make the bumpy cobblestone track bearable. Albeit the climbs are not long nor too steep the surface is far from smooth. We had lunch at Hapuawhenua Viaduct and were lucky to see a freight train cross the new viaduct – literally a real hoot.

SARCC is a medium sized recreational cycling club who embark on regular rides around Adelaide and further afield.

Their New Zealand tour was a DIY affair. The group (of 36) hired three minibuses and then added bike trailers and bikes from Natural High. Eric designed the route and itinerary, mixing gentle, cruisey rides with the occasional more challenging route, as well as non-riding activities. Accommodation close to each ride was booked in advance, and the group cooked and dined together each evening.

Natural High supplied a variety of bikes, including 29” MTB and commuting bikes, and Eric says they “received great guidance from the friendly competent staff at Natural High, both in fitting and selecting the right bicycles.”

They must have enjoyed their trip because they’re coming back next year to tackle the South Island!

If you’re a member of a cycling club looking to do something similar, drop us a line. We can help you organise bike trailers and bike hire, as well as assist with route ideas and accommodation recommendations.