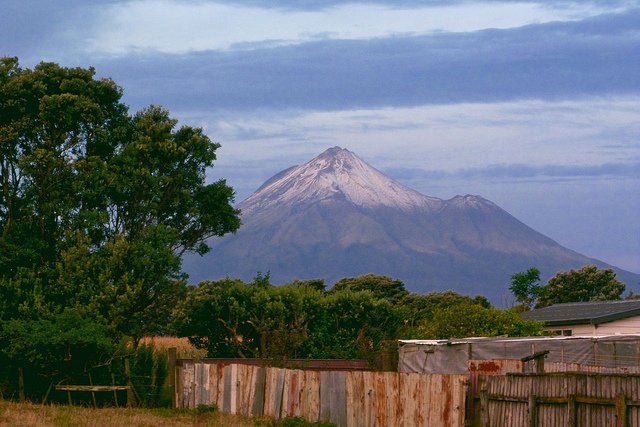 New Zealand is home to some of the world’s most stunning peaks. Some offer serious climbing and mountaineering opportunities, while others have played leading roles in Hollywood blockbusters.

Mt Taranaki
Mt Taranaki is New Zealand’s most perfectly-formed volcano – fly over the top and you’ll swear it was carved with a compass. The mountain is surrounded by Egmont National Park, where numerous tramping opportunities lie. It’s also possible to ski the mountain (during the winter) and hike to the summit, although this is a trip for experienced hikers only, since weather conditions on the mountain can deteriorate rapidly.

Aoraki Mt Cook
Aoraki Mt Cook is New Zealand’s highest peak, standing at 3,724 metres (12,218 feet). Named “Aoraki” meaning “cloud piercer” by South Island Maori tribe Ngai Tahu, it’s one of 28 mountains that make up the rugged Southern Alps. Sir Edmund Hillary made his first ascent to the summit in January 1948, and mountaineers come every year to test their mettle against its formidable flanks. Aside from sitting amongst spectacular alpine scenery, this region is also famous for its crystal-clear night skies, and is the only Dark Sky Reserve in the southern hemisphere.

You can ride amidst the splendour of the Aoraki Mt Cook National Park as part of the Twin Trails tour. You’ll overnight in the park, getting the chance to check out the sparkling night skies, before embarking on a morning helicopter flight across Lake Pukaki.

Tongariro National Park
With its jagged volcanic rock formations and eerie barren landscapes, it’s hardly surprising that the Tongariro National Park was used as the site of Mordor and Mount Doom in the Lord of the Rings trilogy. This UNESCO cultural and natural World Heritage site is home to three mighty mountains: Mt Ruapehu, Mt Ngauruhoe and Mt Tongariro. Mount Ruapehu and Mount Ngauruhoe are also two of the most active composite volcanoes in the world.

The Mountains to Sea Cycle Trail, which runs from the Central Plateau to Whanganui, offers numerous cycling adventures in this area. Popular sections include the Ohukune Old Coach Road, and the Bridge to Nowhere Track.

Mitre Peak
Towering Mitre Peak (so named because of its close similarity to a bishop’s mitre) adds extra impressiveness to stunning Milford Sound. Rudyard Kipling called the Sound the eighth wonder of the world, and it’s certainly a must-see location for most New Zealand visitors. It’s possible to climb to the top of the peak, but not many people do due to the difficulty of the ascent.

For a truly unique perspective of Mitre Peak, check out our 5-day Milford Sound Cycle Tour, which includes an overnight stay on the magnificent Milford Sound.