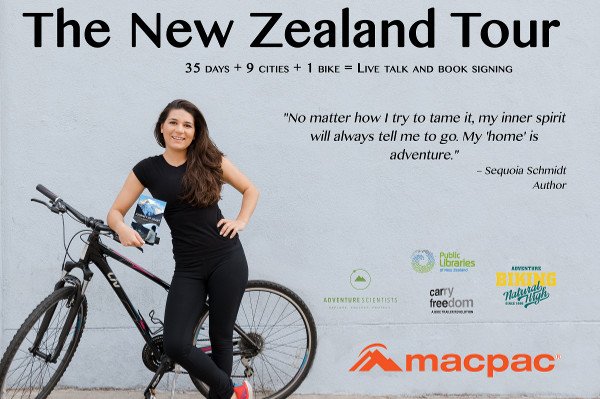 Sequoia Schmidt is no stranger to adventure. The daughter of renowned mountain climber Marty Schmidt and sister of 25-year-old Denali Schmidt, who both died in an avalanche on K2 in 2013, Sequoia is about to embark on a 35-day cycle tour across New Zealand to promote her recently-released book Journey of the Heart: A Sojourn to K2.

The book documents another intrepid journey in her life – her trip to K2 Base Camp in 2015 to retrace her late father and brother’s footsteps, and “respect the mountain and the climbers who came before.”

Born in the Hawke’s Bay but now living in California, this is Sequoia’s first time back in New Zealand following the deaths of her father and brother. She’ll be stopping in nine cities along the way, conducting book readings, Q&As and signings, starting in Queenstown and ending in Auckland on May 4.

Sequoia will be pedalling her way around New Zealand on a Surly Long Haul Trucker, picking it up from our Christchurch branch and returning it to our Auckland branch at the end of her tour. This is a robust, comfortable bike that’s perfect for the kind of long-distance trip that Sequoia is about to embark on. (If you’re considering cycle touring around New Zealand, check it out on our website).

Fancy meeting Sequoia and hearing more about her amazing adventures? Here’s a list of her tour dates:

P.S. Mountain bike fan? Crankworx is taking place in Rotorua right now. This is the first major event of the new season and there’s heaps going on, including the Rotorua Pump Track Challenge on Friday 31 March and the Crankworx Rotorua Downhill on Saturday 1 April.