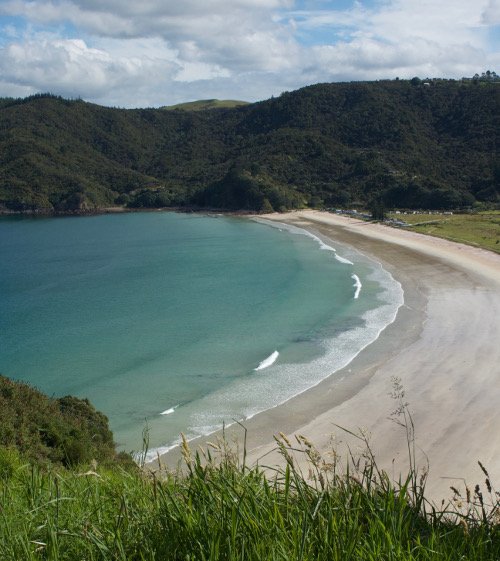 Marvel at majestic Tāne Mahuta
Day two of this tour takes you through Waipoua Forest, site of New Zealand’s largest living kauri tree. The age of Tāne Mahuta, which means “Lord of the Forest”, is unknown but it’s estimated to be between 1250 and 2500 years old.

Soak up the views of Hokianga Harbour
According to northern Maori, the sand dunes of Hokianga Harbour are where the great explorer Kupe first set foot in New Zealand. Like Kupe, you’ll be arriving under your own steam, although your first glimpse of these beautiful waters will be from the saddle of your bike, rather than a canoe.

Witness the power of two mighty oceans merging at Cape Reinga
At the northernmost tip of New Zealand, the currents of the Tasman Sea and the Pacific Ocean meet in explosions of spray and spume. The views are outstanding and on a clear day you can see all the way to the Three Kings Islands. Cape Reinga is significant to Maori, since it marks the point from which Maori wairua (spirit) return to their traditional homeland.

Visit the Waitangi Treaty Grounds
It was here, in 1840, that the Treaty of Waitangi was signed between the British Crown and more than 500 Maori chiefs. Today the Treaty Grounds and museum offer an opportunity to learn about Maori culture and the events surrounding the signing of the treaty.

Explore Russell, gateway to the Bay of Islands
It’s hard to believe that pretty, laidback Russell was once known as the Hell Hole of the Pacific! The little town is also home to New Zealand’s first hotel, the Duke of Marlborough, which will be your base for two nights. By far the best way to explore the surrounding area is from the water and numerous operators offer sightseeing cruises around the Bay of Islands.

Three departure dates for this tour are on offer: 4 November 2018, 7 January 2019 and 7 April 2019. It’s graded moderate to challenging, with daily distances of between 23 and 147km. This is a fully-guided tour, which means all accommodation, most meals and daily luggage transfer are included. You’ll also have the option of hopping aboard the support vehicle if, at any point, you feel like a break from riding. Like to know more? View the full tour itinerary on the website, or get in touch today.