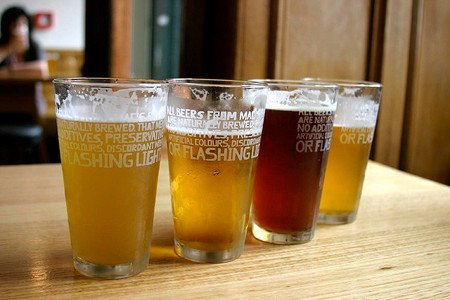 When is a cycle tour also an exercise in eating and drinking? When you’re sipping and savouring your way around the Great Taste Trail Nelson…

Meandering through the picturesque Nelson and Tasman region, the Great Taste Trail serves up relaxed riding, stunning coastal views and a seemingly limitless supply of cafes, breweries and vineyards.

This northern tip of the South Island enjoys more sunshine than any other part of New Zealand, meaning hop gardens, orchards and berry farms flourish. You’ll find plenty of roadside fruit and veg stalls dotted along your route – leave room in your backpack or panniers to take home a few treats.

Mainly flat riding makes this trail a great option for families or newbie cyclists (although not so great for working off the excess calories!) Ride the whole 174km loop… or break it into bite-sized chunks. Here are a few options:

From Nelson:
Ride round the Waimea Estuary to Rabbit Island, a popular beach and picnic spot. From there, you can catch a ferry to Mapua (check ferry times here) and explore the shops and galleries at Mapua Wharf.

From Motueka
Head out along quiet back roads to Riwawa, where refuelling options include the Ginger Dynamite café and Hop Federation brewery. If you’ve overdone the eating part, opt to push on to the pretty beach at Kaiteriteri. This route will take you through the Kaiteriteri Mountain Bike Park – there’s a hill involved – but the coastal views and golden sands at the end are more than worth it.

Or, head south from Motueka to the little town of Tasman. There are several vineyards just off the trail – check winenelson.co.nz for an interactive map. Push on a little further along the Ruby Coast and you’ll find the 2013 New Zealand Café of the Year. Jester House is home to fabulous baking, a rambling, organic garden and tame eels!

Sample it all
Alternatively, strap on your panniers and complete the whole circuit. The trail is 174km in total – at a relaxing pace you should be able to complete it in three or four days. Accommodation is as plentiful as the food options – you’ll find a good selection on the trail website. 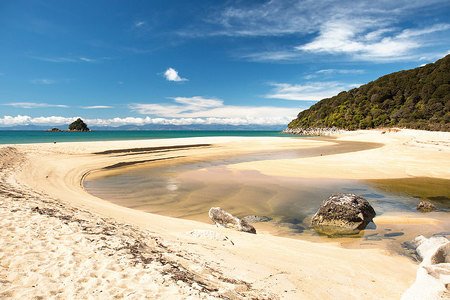 Golden rays beam down on the little city of Nelson, located at the top of the South Island. It boasts more sunshine than anywhere else in New Zealand, three national parks and the title of arts capital of the country. Plenty to see and do, then!

Jump on your bike: Nelson is a pedaller’s paradise with kilometres of scenic tracks and trails, conveniently pitstopped by great cafes, wineries and craft breweries.

The two classic rides of the region are the Great Taste Trail, a 175km meander through the Abel Tasman National Park and Golden Bay region, and the Dun Mountain Trail, a 38km Grade 3 MTB trail.

For details of other trails in the region, hop on over to the Nelson Mountain Bike Club website.

Wander the city streets: The heart of Nelson is a compact one kilometre square, brimming with art galleries, boutiques, cafes and bars. It’s one of the oldest settlements in the country and features plenty of beautiful buildings.

Journey to the Centre of New Zealand: Take a walk through the botanical gardens (where New Zealand’s very first game of rugby was played) to the spot that supposedly marks the country’s mid-point. Whether or not this is technically accurate, the landmark still provides a picturesque, bird’s eye view of the Nelson coastline.

Snorkel, kayak or walk at Cable Bay: Take a short drive east from the city and you’ll arrive at Cable Bay, a sheltered stretch of beach with calm seas and plenty of interesting wildlife. The Cable Bay walkway is a three hour meander around the coastline and offers spectacular views of the region.

Fill your panniers (and stomach) with tasty treats: Markets are a big part of life in Nelson. The Farmers’ Market takes place every Wednesday in the heart of the city, while Saturday brings arts and crafts, plus plenty of local produce to Montgomery Square, for the 30-year old Saturday market.

Drink well: The Nelson/Tasman region is the only area in the country where hops are still grown. Not surprising then that numerous craft breweries have sprung up, offering everything from pale ales to hearty stouts. Try Bays Brewery, where beers are made without chemicals, preservatives or sugar. There are also more than 25 wineries in the region. Find full details at wineart.co.nz.